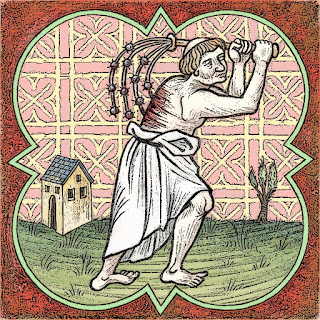 Subjected to continual punishment, flagellants are treated as wearing plate mail (+3) and shield (+1) despite going unarmored at all times.  Any unmodified attack roll of 12 with their whips requires an opponent to roll saving dice or become disarmed.  Monks can engage unarmed and avoid this, although they lose ambidexterity when doing so owing to the sheer ferocity of their foe(s).  These fanatics roll all saving dice at +2, ignoring pain and other distractions in their religious zeal, making them quite impossible to reason with.
Posted by Olde House Rules at 5:25 PM 2 comments: