So after months of work on Stalkers of the Elder Dark, we're hankering for a world where cosmic abominations aren't seeking our doom, and Pits & Perils fits the bill nicely!  So here's

a little something for your fighters (and elven fighters)...

It's a new combat maneuver called specialization, and it works like this:

SPECIALIZATION can only be taken at 6th level (and beyond), once the character has developed their fighting skills.  This grants an attack bonus of +1 with any specific weapon chosen by the player in coordination with the referee, noting that this applies to a specific variety; i.e., hand axes instead of just axes as per the following:

Note also that certain two-handed melee weapons and/or polearms are excluded, for these benefit from distance and momentum instead of finesse, although the referee can make exceptions as they so wish.  This reflects the greater skill that comes with practice, especially after six levels of battling monsters!  An optional addition to the maneuvers.

And here it is.  If you'd like to see your characters (the combatants, at least) improve their fighting ability with level, this option makes it all possible.  Specialization puts a party on parity against their enemies, who will improve, although magical weapons obviously remain an important part of their advancement.  Now hit those pits and master those perils...
Posted by Olde House Rules at 3:07 PM No comments:

Stalkers of the Elder Dark (Lovecraftian Horror Minus Cthulhu) Is Here Because the Stars Are Right...

Tremble humanity, for the stars are right!  Those who know me well know that I love the horror genre and actually prefer it (the good stuff, anyway) as a literary medium.  So why did it take so long to release a horror-themed RPG?  I don't know...

But as if to make up for lost time, we introduce Stalkers of the Elder Dark!

Stalkers is a game of cosmic horror.  It's Lovecraftian in aspect, but not built around the Cthulhu mythos specifically.  There's ancient Elder Ones, of course.  Foul things from beyond the Void and terrible Servitor Races with horrific designs.  Lovecraft and his followers were really on to something.  But they got many details wrong, perhaps on purpose, to protect us from the terrible truth of which only they knew.  Hey, it could happen...

Who knows?  Maybe the writers of pulp fiction are non-players in your game!  It's an idea we dabble in because play is set in the 1920s; the perfect time for horror.  Think about it for a minute.  The world was at a crossroads.  The Great War was over, and science was revealing wonders and making life better.  Even so, a fever could still be deadly, and there was no shortage of old-world challenges lurking just beneath the surface.  Humanity was feeling its oats while facing the same old evils - it's a treasure trove of the gameable! 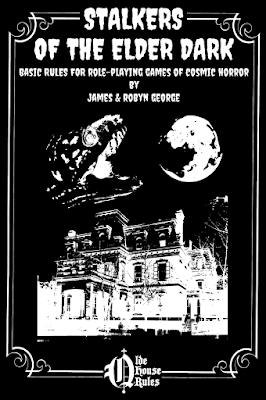 But Stalkers is a rules light (and d6-based) system that nonetheless goes deeper than our previous offerings.  It dabbles in classes (backgrounds complete with specialization options) and skills (with ranks and opportunities to advance over time).  Combat is (very) fast and furious.  However, the narrative elements work hand-in-hand with the flow of play, and clever players can ask about their surroundings and take timely cover behind a nearby desk to avoid greater injury.  Firearms figure prominently (and with greater technical realism), but don't expect to have to count every bullet, either.  Play shouldn't be hard.

Ultimately, this is a game of stodgy professors, famous opera singers, rough-and-tumble moonshiners, and bush pilots coming together against the dark.  And all against the backdrop of the real 1920s; because the real world is unmatched for its depth and cruelty.


Fear figures prominently as well.  Read At the Mountains of Madness.  The protagonists weren't reduced to quivering, suicidal jellies.  They were hopped up on fear and had to work through it.  Stalkers adopts this "you gotta roll with it" approach.  At character creation, players learn their darkest fear (or phobia) and can even "trade" fears for skills.  During play,  they can decide whether damage is physical (wounds) or mental (trauma).  The latter can save your life.  But now you have to actively resist your fears or flee in terror (or freeze up) in critical situations.  Fear isn't death.  It's more like a faithful companion...

And leave it to Robyn to come up with the defining "theme" of the game.  The Servitors threaten our humanity, and herein lies a way to incorporate Lovecraft's morbid fear of mixed blood minus his apparently racist and xenophobic leanings.  For despite its supernatural pretensions, Stalkers is largely naturalistic, something we're pretty sure the old master would have approved of.  Oh, and fans of Blood of Pangea will appreciate the game's narrative connection to Opherian Scrolls (although not mechanically).  It's a shared cosmos...

Finally, Stalkers breaks with our crappy rulebook design strategy, trading manual type for something more period-appropriate and featuring original art in homage to the dark and grainy silent films of the decade.  We're proud of how it all turned out.  Oh, and check out the Deluxe Character Record Sheets to get you started!  They're free, of course.

Stalkers of the Elder Dark is a digital download on OneBookShelf (all sites), although a physical version is planned for the (very) near future.  We hope it brings you enjoyment and delicious fear, because cosmic horror is scary enough already without also being hard...
Posted by Olde House Rules at 9:24 AM No comments: