A Playable Druid for Pits & Perils...

Druids, those mysterious priests of nature have an enduring place in gaming history, and Pits & Perils is no exception, although in that game they appeared in the so-called enemies section as something encountered, but never played.  Well Robyn's pushed long and hard for a playable version, and others were asking as well, so we just had to make it so.  Now grab your books, turn to page 32, and add playable druids to your game...

The druid class is a rarity, being one of a few charged with advancing the order's cause from outside their secretive ranks.  As such, they sometimes fall in with adventuring parties, especially those with elves and/or others sympathetic to their beliefs, for many still observe the old ways.  That said, those lucky enough to attract their kind get the benefits of both a cleric and magician, although the adventuring kind is a magician variant first and foremost.  These come ready with the following abilities:

(1) Druids advance as magicians, but get spell points like a cleric, although unlike their sorcerous counterparts, enjoy access to all available spells immediately... 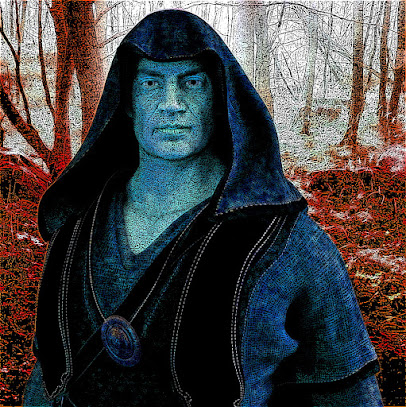 (2) Being nature-based, their spell selection is limited as shown:

(3) At 1st level (Initiate), druids can speak with plants and animals.  This requires no spell points, although a roll might be needed, for this is an appeal, not a command.

(4) From 4th level (Ovate), they heal as a cleric, restoring the maximum by level.

(5) Upon reaching 7th level (Versifier), the druid can receive a prophetic vision once per game day.  This involves a trance lasting 1d6 rounds during which the player asks the referee a single question about a single person, place or thing, and gets the answer in a vision which must still be interpreted.  This grants unprecedented knowledge.

(6) At 9th level (Master), they can work the Form spell at will without spell points.

Adventuring druids are limited to 9th level, although their special abilities definitely put them on par with their peers.  If the campaign permits, they might even be allowed to ascend to the rank of Arch-Druid (10th level), whereupon they retroactively get spell points like a magician and may spend all of them to reincarnate per the basic rules.  Achieving this station demands a vacancy and a specialized quest which may or may not involve the rest of the party, after which they transition into a powerful non-player figure.

Our adventuring druid is a powerful addition to any campaign, although just enough that the referee might need to adjust for this.  But if their setting seems right for the old ways, they could be just what the campaign ordered.  And that's it is, a fully playable druid for Pits & Perils, although it's never really complete until you, the reader, put your own stamp on things the old-school way.  Until then, here's hoping nature smiles on everyone...