Early D&D, inspired as it was (hell, outright birthed) by historical wargames, channelled medieval Europe heavily. Gary's obsession with polearms is legendary; but it was more than that, and what else would we expect from a fantastic medieval wargame? Of course, the fantastic precedes a European mileu by millenia and extends beyond its borders to storied parts beyond. But Europe, with its armored knights and dragons, really stuck...

And part of this was medieveal Christendom, especially in regards to clerics. Now TSR, already aware of a growing panic, wisely avoided statting up Jesus; but its earliest artwork nonetheless depicted many clerics as Christian. From crosses (already effective against vampires) to monkish tonsures, early D&D art had a thing for the Church, doubtless because its faith heavily influenced the medieval expereince as understood by many.

Here's three of my favorites, with thoughts on what they meant to the early hobby:

(1) RESURRECTION. These decidedly Christian clerics are providing a service attributed to the saints. Indeed, healing and/or restoration is emphasized in this tradition... 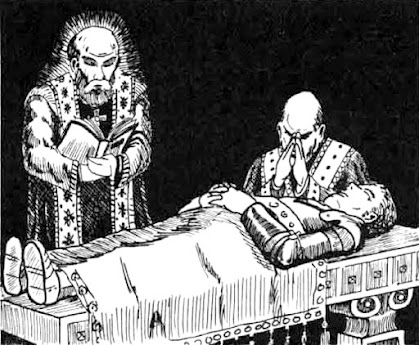 (2) A DUNGEON DWELLERS MINIATURE. Nothing says "Back in the name of (_______)" quite like a cross shoved in evil's face. There's no doubt who this adventurer serves... 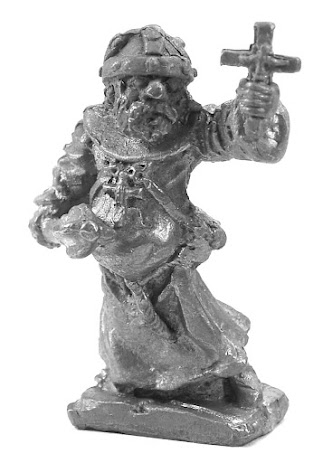 (3) A FUN MEDIEVAL MONK. Played for laughs; but again, there's zero doubt that this is supposed to be the party's cleric. Crosses and tonsures made for shorthand... 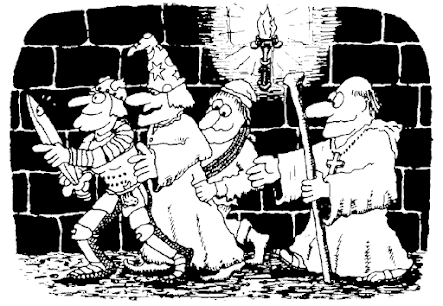 Again, this was all about recognition. The fantasy genre by way of gaming was still being created, and historical influences reigned supreme. Magic users still wore robes emblazoned with moons and stars, and fighters wore historically accurate armor and weaponry (Gary's polearms) because this is how these concepts were understood. Fortunately, time and steady mainstreaming changed this; but a certain storybook charm absolutely remains.

And there's more. Much more. Part Water? Sticks to Snakes? Their collective religious influences are obvious. Early D&D was a fantastic medievel wargame, and its understanding of the world was clearly centered thereupon. Even so, Greyhawk had its original deities, including non-human ones from the start; and the game quickly moved past its European roots to encompass the world's fantastical traditions, fertile ground for creative minds...

It recently occured to me (considering OD&D, sans supplements*) that B/X just might be the thing to play if you want the OD&D experience without having to decipher Chainmail (not necessarily enviable) or shoehorn in your own houserules (a more palatable option for many given the hobby's demographic). How so? Here's why I think it's best:

(1) ABILITY SCORES are simple and streamlined. It's modifiers are satisfyingly complete while avoiding AD&D's bloated approach. Exceptional strength might be cool (nothing compares to rolling that 00), but is it really a necessary thing? My mind goes back to Spinal Tap, where Nigel's amplifiers hilariously went to 11. In B/X you know almost immediately how well your character can read and/or speak. Wisdom is genuinely useful to non-clerics, and everything fits on a convinient page in purest OD&D fashion.

(2) CHARACTER RACES make better sense. Race as class was a technicality. In OD&D dwarves and halflings could only be fighting men; elves could progress as fighters and magic-users subject to some incomplete rules, but it wasn't spelled out (and difficult without the Chainmail reference). B/X gives them all armor and weapons, making each de facto fighters with racial abilities added. Race as class? No. Class restrictions simplified? Yes.

(3) ALIGNMENT matters. And gets explained. I know it was originally concieved as faction, an approach so denuded of meaning as to feel unsatisfying. This might be a (relatively) modern innovation; but given its close proximity to the original texts, it certainly has to reflect approaches already happening at the table. I tread cautiously because I wasn't there and welcome wiser minds on the subject; but it certainly feels like a refinement of OD&D's style, which it is by definition even when different from Gary's original rules. 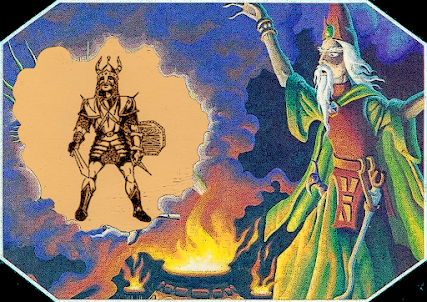 (4) SPELLS, MONSTERS, AND MAGIC ITEMS draw from the rich soil of OD&D's history, preserving early on the game's emerging traditions. Charm spells and rust monsters populate OD&D's hallowed halls, eternally preserved in amber for posterity; while Gary's alternative combat system gets properly explained with examples (yes, Holmes did this too; but as much as I love it, B/X is the more complete offering). Every effort is made to preserve OD&D's open-ended approach; but it does so in a coherent manner, if that makes sense.

(5) LEVELS are capped at 14th for humankind, with all others mapping to OD&D's admittedly more limited offerings, although dwarves and halflings get a better deal. Men & Magic took players to 10th (16th for magic users), so everything translates. Both iterations invite the DM to extrapolate beyond that; and while accidental in B/X, which promised a later companion fulfilled by BECMI, it nonetheless clones OD&D's ceiling in a real way.

BONUS IMPRESSIONS (or why not just use BECMI instead)...

(6) ARTWORK by Otus and Willingham both preserve D&D's early and more amateur aesthetic while improving on its filched comic book style. I have nothing against BECMI (it's the same mechanics from the same publisher); but Elmore's steadfast professionalism marked a clear shift towards something else. It's a sound choice (and he's a talented artist); but I do miss the greater variety of the earlier stuff, although it's purely subjective.

(7) BECMI led the game beyond ordinary people under extraordinary circumstances, and while this might have been brewing early on (I'll defer to the experts), it doesn't feel like anything OD&D - or any of its supplements - endorsed. Again, there could be a mountain of proofs against this charge, but BECMI clearly shifted gears (speakers to 11). Now it's not remotely lost on me that B/X planned to do this; but accidental or not, B/X is what you play when you want a cleaned up and clarified OD&D that feels truly vintage...

All of this is academic, of course, as B/X and BECMI were seperated by mere years, and both from OD&D by little more than a decade (attesting to its rapid growth). But it really speaks to the combination of objective and subjective criteria that make a game feel right, and even then it's all someone's opinion. But if contemplating OD&D, B/X delivers.

*If you want OD&D and its four supplements, AD&D is the far better choice...