I'm a first-generation non-wargamer.  Ok, but what does that even mean?  Cue the history lesson.  Dungeons & Dragons was created by historical wargamers who just happened to like low-fantasy sword and sorcery.  Gritty stuff that bordered on the real.  Gygax famously (and perhaps ironically, given where the hobby ended up) disliked Lord of the Rings, with its elves and (to hear him say it, tedious) pretensions.  I disagree, finding this a reverse-conceit, but whatever.  Strokes.  Folks.  But it did impact how these early games were played...

Primordial D&D was two-fisted action with swords.  And spells.  It was at once both ridiculous and serious, historical and fantastic.  Your fighter might pass a nearby castle, armed with historically accurate armor and weapons (and polearms, of course), aware that yonder fortress housed a squadron of knights mounted on fire-breathing rocs.  It leaned heavily on wargaming because it was created by - and for - wargamers, and approached its fantastic elements with a nod and a wink because it couldn't take them too seriously.

Now Gygax delighted in John Carter's exploits, so he must have genuinely admired the fantastic.  Even so, this was pulp, with its shirtless-men-fighting-bears aesthetic.  Magic was window dressing at best, which translates to the OSR's emphasis on human choice over superhuman power.  Monsters became a strategic challenge, and magic a strategic cheat he was keen on limiting.  In short, OD&D was a serious wargame with a sense of humor, a beer-and-pretzels diversion for those who'd rather relitigate the Battle of Trafalgar. 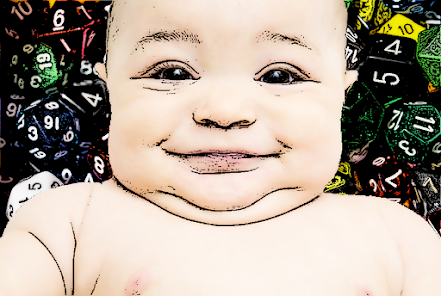 Early D&D was wargaming - and wargaming was its endgame.  Level up, build a fortress, and it's back to protractors and green felt tabletops.  The fantastic stuff was its sense of humor, hence the gonzo, but in all fairness to its adherents, a strategic challenge as well.  This was the hobby's first generation, and it deserves our deepest respect.  But the hobby saw its second wave in the form of non-wargamers.  These were fantasy enthusiasts drawn to the storytelling potential of a game where magic figured more prominently...

And more seriously.  We were Tolkien fans who longed to recreate the adventures we thrilled in and to walk within their lavishly constructed worlds.  We (and I say that because I was there) were geeky types who devoured comics, haunted the aisles of our local bookstores back when everything was lumped under science fiction, and stood in line for hours to watch a groundbreaking film called Star Wars.  And as we read Starlog, we became aware that there were others like us: fantasy lovers in search of a community - and a voice.

Geekery wasn't mainstream, but Star Wars was changing that.  God bless America, but once you can sell a thing, it becomes a thing.  There was a sea change brewing, and we kind of knew it, although it was hard to put our finger on it.  This was 1977, the year AD&D's Monster Manual appeared in hobby shops.  You'd walk in to buy some Testors model glue for your Shogun Warriors kit and get slapped in the face with that.  Oh, and the strangers in the back cheering about the damage their fireball just did was a powerful siren song.

Holmes aside, there was no coherent instruction; and no one, however brilliant, was going to actually learn to play from the original digests or the slick new hardcovers.  You needed a mentor, often, a first-generation wargamer who imported much of their gonzo idealism.  But we were quick learners eager to put our own stamp on things - and we nailed it.  From the beginning, Gygax cited those who were by no stretch of the imagination ardent wargamers as keys to the hobby's growth.  And for a guy who hated Tolkien, he was pretty right on...

I love Holmes Basic.  Aside from being my gateway drug (long story), it's just the perfect synthesis of old-school D&D and something simpler and more streamlined.  As far as introductory sets go, it's stuffed with content; and the fact that it only takes its players to 3rd level evokes the wonder of low-level play and everyone's first time at the table.  The spell inevitably fades with experience; but it begs the question: Is it possible to play Holmes Basic as a complete game?  It's a question a fanatic like me loves to ask.

In fact, I asked it four years ago.  It was a thought experiment written in the moment, but I've had time to refine the idea.  Looking back, it needed the work.  So here we go, once more tackling my pet project.  If you own this excellent product, you can use the following rules to run Holmesian games in all their low-level glory.  Just observe the following:

(1) Assume everything else is the same except for that which follows...

(2) Characters begin the game with maximum hit points at first level (i.e., 8 for fighting men and women, 4 for magic-users, etc.), rolling randomly for levels beyond first. 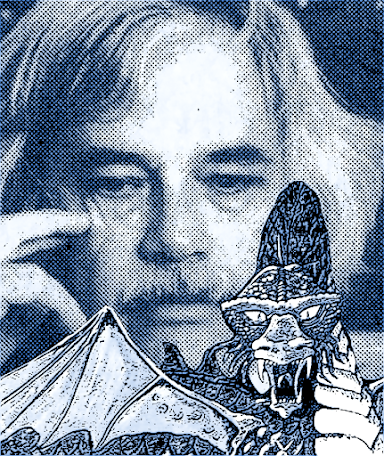 (3) Should a character die, whether in combat or similar misfortune, they fall unconscious, losing one level.  If recovered by their friends (within a reasonable amount of time), they awaken with 0 HP, but very much alive, and may be further healed, although never beyond what their new level allows.  First-level characters aren't so lucky and die, an all-too common fate, noting that lost levels may only be recovered through further adventures.
(4) Clerics add +1 to all turning attempts per level after 1st.  Third-level clerics add +2 and may turn mummies on an unmodified 12.  Specters and vampires represent the apex of undead villany and reject even the most pious of practitioners.  This serves to preserve some mystique for these monsters and a sense of lore (if not dread) within the campaign...
(5) Elves serve as both fighting men (maximum 2nd level) and magic-users (maximum 1st level) for a total of three levels, beginning with 6 HP, +1d6 at their second fighting level when eventually attained.  Experience points are split between both classes - even when further advancement (as a magic-user) is no longer possible.  Those at first level in both classes die when reduced to 0 hit points, but enjoy the benefits of armor and spellcraft.

(6) Fighting men (and elves) add +1 to hit per level after first to reflect their prowess.

(7) Spellcasters get access to more magic and miracles, mainly to keep them relevant in a scaled-down game where higher levels will never be reached.  Clerics get spells at first level, while magic-users employ more across the board per the following spell table: 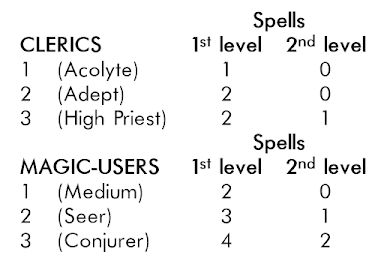 (8) Thieves must redo their entire table lest they perform so poorly that their relevance gets called into question.  After all, a 3rd-level robber, is supposed to be a master thief...

(9) Hirelings are necessary to take on the toughest foes, which are included in Holmes' introductory rulebook just begging to be fought.  To this end, the referee should ensure an expeditionary mindset, incorporating men-at-arms and porters to full effect.
(10) For every successful expedition into the dungeons or wilderness, meaning one where the party leaves and returns alive, each character earns 1 renown representing the fame surrounding their exploits.  At 50 renown, they may occupy a church (cleric), castle (fighting man), tower (magic-users and elves who opt out of a castle), or den (thieves, and always located in the city).  Each employs 3-12 servants, a third of which are henchmen who never leave the home base.  Such abodes earn enough revenue to be largely self-sufficient.
Doing this will (hopefully) result in a game that captures old-school's emphasis on ordinary people in extraordinary circumstances.  Clerics are warriors, with powers all the more miraculous for their rarity; and magic-users feel more like Gandalf and less like the overdone superheroes of modern fare.  Powers take a back seat to good strategy, and every delve feels like an expedition into the Amazon, because it is.  The excitement of low-level play is preserved because, really, a lot comes down to little guys against big dangers.
But of course, the last and most important thing is what you, the reader, add to this, for no game is ever complete until the players make it so.  Anyway, in this time of isolation and knuckle-biting politics, a new take on a classic game just might be just what the proverbial doctor ordered, and Holmes (an MD and neurologist) was the real deal.  Anyway, please enjoy this, and don't hesitate to add or change anything - surely Dr. Holmes would approve...
Posted by Olde House Rules at 2:45 PM 16 comments: