As we put the finishing touches on Infernal Realms, here's a terrible little beastie for anyone brave (and foolish) enough to visit desert environments.  Beware and enjoy!

The CERASTES are solitary, burrowing serpents having two powerful front legs and a pair of flexible horns that swivel, adding an additional +1 to any damage dealt with them.  They dwell in desert environments, burrowing under the sand and awaiting their prey, hiding so well that they can only be detected through magic or when extraordinary steps are taken.  Their surprised quarry must roll saving dice at -1 or become entangled with a successful hit, being dragged below and drowning for 2 hits per round.

When met above ground, they fight with a bite and two claws or by using their flexible horns, these being highly prized by alchemists for use in a wide variety of potions, like Shrinking, etc.
Posted by Olde House Rules at 1:43 PM No comments:

This bit may appear in some future product, but not the upcoming Infernal Realms supplement, because we avoid campaign-specific stuff that treads on referee territory, but...

For those wishing to incorporate the Triune Faith from The Ruined Abbey of Saint Tabitha into their own campaigns, the following table of saints may be useful.  Remember, these were former pagan gods, previously worshiped and (later) converted to worship of the Triune and (his/her/its) interests:


Being servants of the Triune, all are lawful (good) or at least neutral in outlook (being saints).  Future posts and products will almost certainly deal with the forces of chaos!


In order to make the Triune religion feel like the monolithic medieval faith while preserving the polytheism of most old-school campaigns, each saint has its own order and dedicated clerics, making the above table a useful guide.  The pagan and Triune names are both included, so the players can develop clerics outside of this religious structure (something our group has done)...
Posted by Olde House Rules at 5:20 AM 1 comment:

The Temple of Gorush (A Pits & Perils Scenario)

It was 2013, and Pits & Perils was just a month or so away from being published (at the time, in its original Lulu soft cover format only, having not embraced the digital side).  Eager to give the product a final go-round, we ran it at PretzCon 2013, just to know what others thought.  We had a full table...

This was "Siege at the Temple of Gorush", an adventure for 1-3rd level characters.  But first, several explanatory notes, since this was long ago and far away...

(1) This was written before the FINAL draft of P&P, but overall consistency should be preserved.  Mostly...

(2) It's NOT pretty, but it reflects the amateur and very homemade production from the dawn of our hobby.

(3) There WILL be typos, but I really did my best!

Despite its roughness, this scenario is fully playable and ready to be enjoyed if you wish to run it yourself...

On a side note: Robyn had no idea what was in the scenario, and during the game she laid low and encouraged everyone else.  However, she really stepped up at one point, and what she did with the prisoners really pushed her uh, "neutral" alignment!

As we hoped, the players forged their identities during game play experience and not through elaborate (and pre-decided) concepts aided by massive rules and special mechanics, and by the end of the game, they had real esprit de Corp!

The goal was to have fun (and we did).  But we also wanted to demonstrate how depth and complexity could derive from the story and setting vs. complex rules.  We also encouraged these young people to make good choices and work together, as this, not pages of special abilities, is what makes the game challenging...
Posted by Olde House Rules at 7:09 PM 4 comments:

The Steins Have It...

Braunstein! is designed as a medieval (4-14th century) historical adventure game.  Even so, it's nice to mix things up, and David Wesely, the inventor of the concept, was quick to expand his vision into other genres, including a banana republic and, eventually, medieval fantasy games (with Dave Arneson), giving rise to a whole new hobby, not to mention this blog!

In that spirit, we presented Ape Future, a Planet of the Apes conversion for Braunstein!  Well, this time around we have a special guest contributor; Bryan Steward from Black Paperclip Games and designer of the popular Powers That Be and The Uncanny Abode, with not one, but two Braunstein! variations to try... 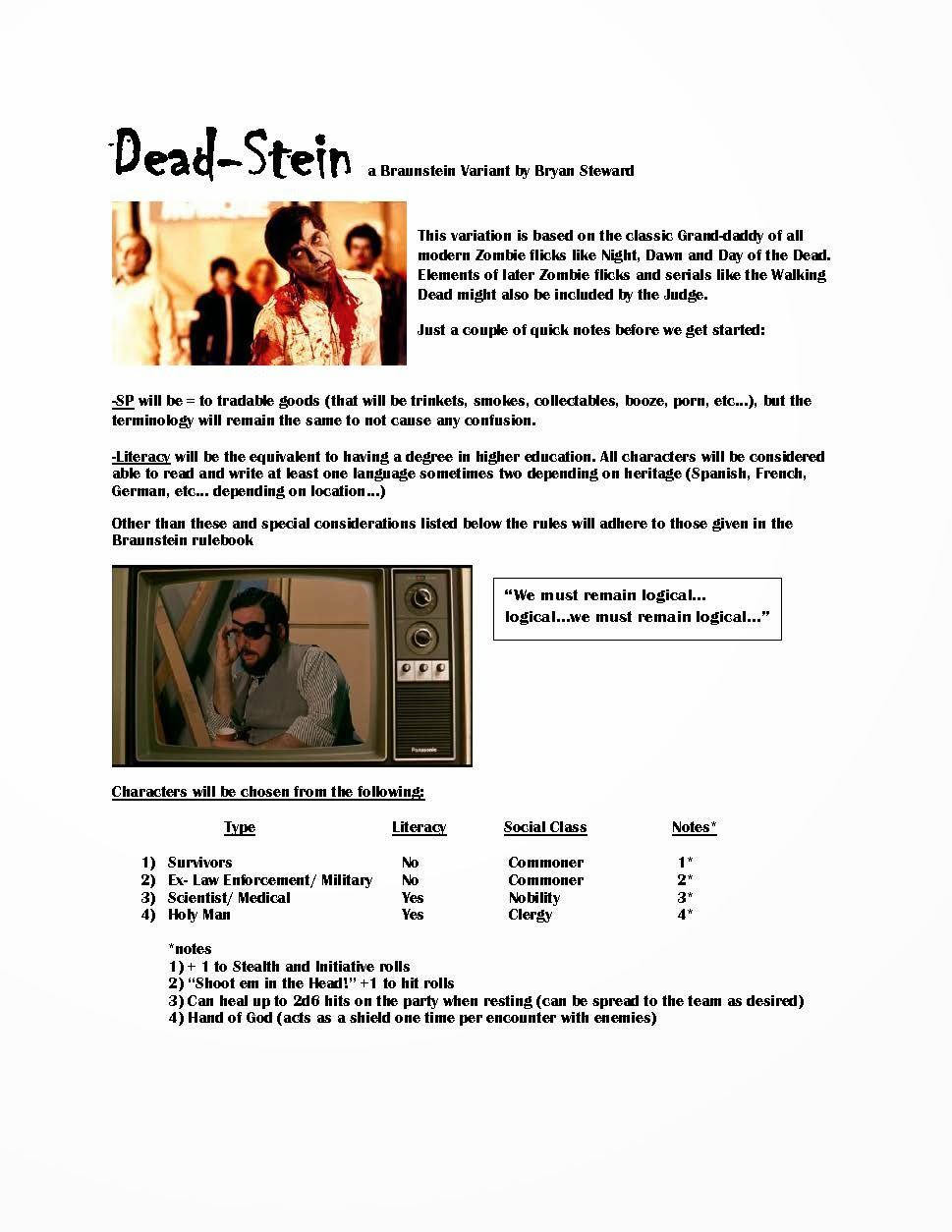 Shoot'em in the head!  It's the zombie apocalypse from when it wasn't trendy and cold-war nightmares ruled all.

For inspiration, get Night of the Living Dead, Dawn of the Dead, and Day of the Dead, from the fiendish George Romero... 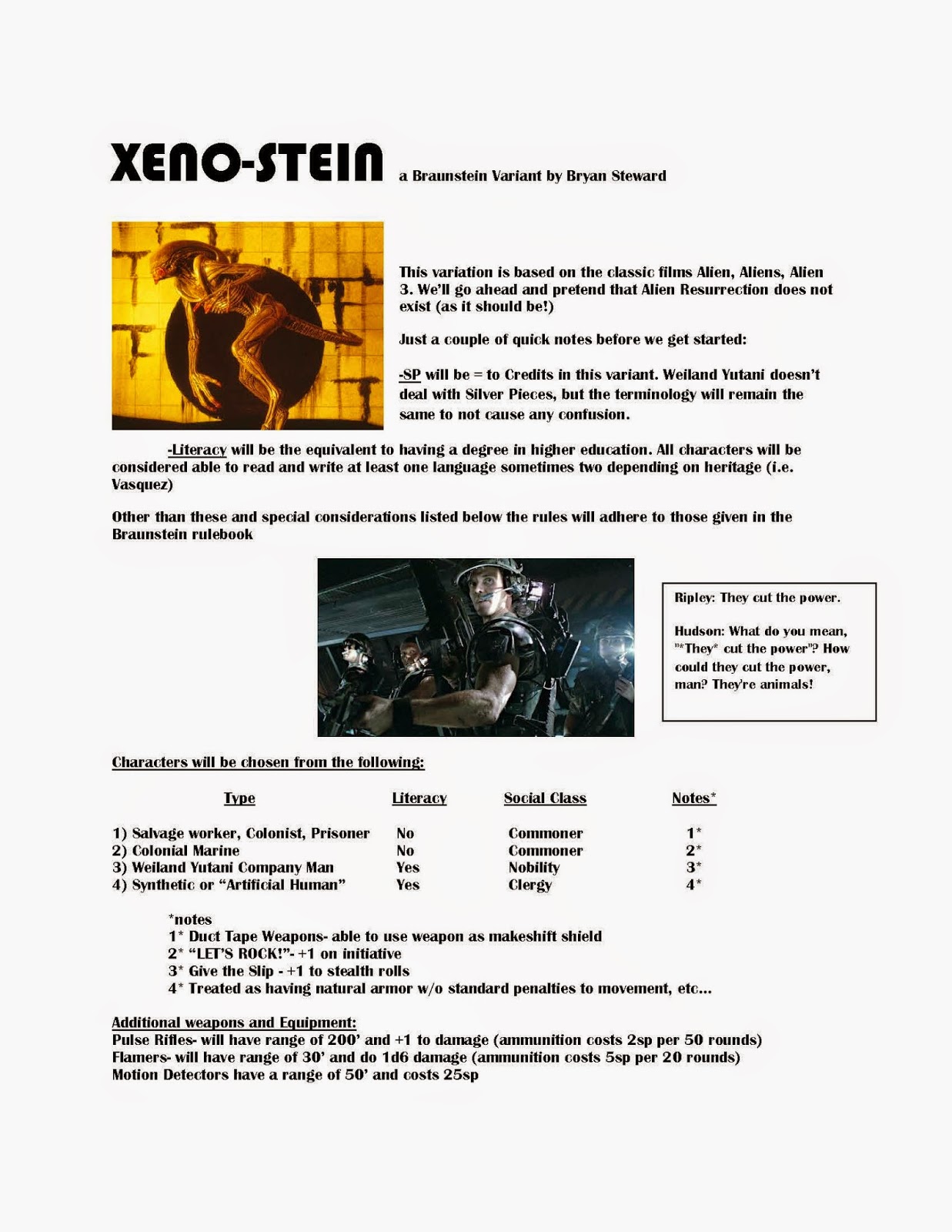 When you find a huge, dead alien with a gaping hole in its chest...leave!

This is based on the Aliens franchise, which has its roots in the late 1970s, giving it proper old-school status.

Oh, and expect to die.  Some of those aliens are tough.  It's chest popping fun...

We hope you enjoy these, and many thanks to Bryan Steward for contributing!  His upcoming Red Skies over Betelgeuse is coming this spring, assuming the aliens and zombies don't get him first, you know how it goes, these things happen!  In the meantime, enjoy his special variations and check out his work at Drive-Thru RPG...
Posted by Olde House Rules at 11:54 AM No comments:

In the early 1970s, America had ape fever, thanks to the wildly successful Planet of the Apes film and subsequent franchise, including more successful movies, toys, games, comic books, and no less than two television shows...

The Braunstein! game is also inspired by the 1970s, and can be easily tailored for chronicles in the ape universe with just a few additional rules that follow here:

(1) If you aren't familiar with the movies, or have forgotten them, you should get them now; call it research...

(2) Characters can be apes or humans:

Note here that apes are quite strong and add +1 to all dice rolled for actions pertaining to this.


(3) Humans are astronauts or mutants as follows:

Mutants communicate telepathically within 30' and use any of the following by spending LUCK as follows:

Psychic attacks deal 2 automatic hits per 3 LUCK spent.  All other native humans are feral and mute.


(4) Players should always reference the character's race in their written description as per the basic rules.

(5) All ape armor is a padded leather, although there is no precedent for the use of shields in the movies (judges can always add them is they wish, however).

(6) Available equipment includes firearms treated as bows for purposes of range and damage, and not as the early guns offered in the original rulebook.  These are equivalent to mid-20th century weapons, typically used for hunting man.

(7) Everything else will conform to the basic rulebook, adding that ammunition cost 2 SP per 50 rounds.

APE CITY lies within a fertile area, ruled by orangutans and protected by gorillas, with chimpanzees working mainly as doctors and the like.  Their culture is mostly pre-industrial, but with simple cameras and firearms, among other things (follow the movies here, and you'll get a few surprises).

The FORBIDDEN ZONE is a desert region off-limits to apes, for it contains the remnants of a lost human civilization.  Here the mutants linger, and indeed, most adventures will very likely occur here, being filled with subterranean places alive with who knows what in the debris of a once-flourishing race.

Planet of the Apes is pure 70s whimsy, so convert your Braunstein! and go ape in the remarkable world these films present...
Posted by Olde House Rules at 6:43 PM 1 comment: