Something I love about old-school gaming is how character centric everything is. Dungeons exist because the players need someplace cool to explore; and monsters, especially of a certain variety, were made exclusively to challenge the party. We can retroactively provide an ecological justification; but really, these monsters (original creations and not derived from mythology) exist solely because characters exist. I call them dungeon bummers, and these made-up baddies remain close to my heart, especially the following creatures:

Gelatinous cubes are virtually invisible and fill a corridor; i.e., the very open space in a dungeon becomes dangerous and requires special care to safely navigate.

Lurkers above drop on the unwary, punishing those who fail to look in all directions. 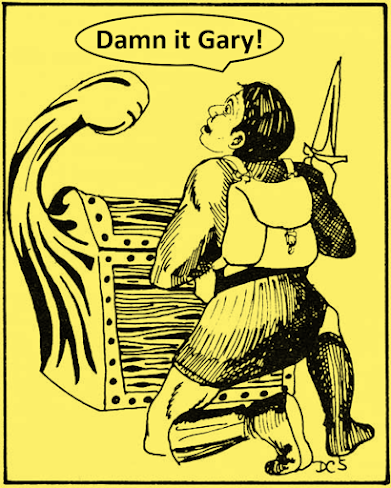 Mimics make virtually any stone or wooden object potentially dangerous, almost as much as all the mimic memes on Facebook. This is the mother of dungeon bummers...

Ochre jellies slip through cracks in the walls, meaning danger lurks in the ordinary crevices abundant underground. They only exist to endanger the unwary adventuring party.

Piercers are the spawn of an asshole god. Now all those stalactites are potential monsters, ensuring paranoia and yet another excuse to prod stuff with your 10-foot pole.

Now I get that any monster presents challenges to a party, however realistic. Bears are terrifying adversaries; and we get those in New Jersey. But monsters specifically created to exploit some common occurrence are a whole other ballgame. These character-centric encounters only exist because the characters exist and interact with the campaign setting, a delightful love letter to the players. It says the game exists for them; dungeons were made with them in mind; and a good DM labors with love to challenge and amaze them...