From Iron Age to Faux Medieval...

Prowling Facebook and delighting in its memes and commentaries on various campaigns, especially D&D's 5th edition, it's clear there's a standard, implied setting - or at least one that resolves itself from what the rules have to offer. I also realize it differs somewhat from mine, pitting an Iron Age Star Trek against the so-called faux medieval I prefer...

So here's IRON AGE STAR TREK. Please note, this isn't a pejorative. It's approach can be lots of fun, and might actually be a more practical solution by far:

1. The technology is medieval, supplemented by spellcraft.

2. Magic is commonplace; indeed, it substitutes for high technology.

3. Non-human races are fully integrated. Think dwarven blacksmiths and elven shopkeepers in human settlements. An orc runs the bakery - or a dragonborn.

Again, this isn't a pejorative. I mean, what could be funner than a world with magic shops on every corner and fantastic races sharing space? I call this an Iron Age Star Trek because substitute magic for high tech and faerie bloodlines for alien species and that's the inevitable result. But it's also a more practical approach when you've got real magic in the hands of players eager to use it. And of course, subjecting players to unwanted racism and/or sexism in service to so-called realism isn't nearly as cool as some think it is... 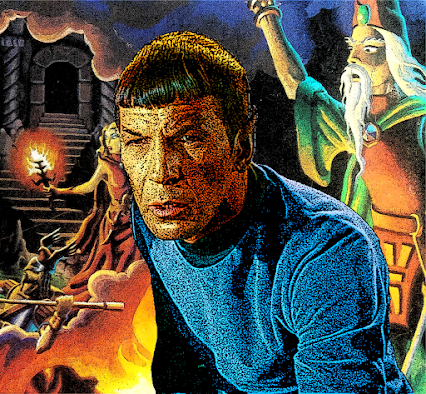 SIDE NOTE: I've know referees who subjected characters to certain extreme violations, defending their artistic integrity against the victims of this terrible move. Spoiler: they avoided bathing and bought katanas at the mall. Absolutely don't be this misguided person.

And here's my approach: FAUX MEDIEVAL, which could also be seen as a pejorative when taken out of context. It's not perfect, but it offers another experience:

1. The technology is medieval, with no magical augmentation.

2. Minor magic is found in some villages, but more powerful stuff is in the hands of a few, with extravagant displays of power vanishingly rare. This makes magic precious.

4. The culture is medieval; but I don't hit anyone over the head with obvious discrimination, especially when it maps to contemporary abuse. Realism is never worth that.

This, and none of the neckbeardy stuff that always requires prior coordination. Now certain people are horrified at the questionable circumstances behind half-demons and similar monsterous combinations. It's a darker side of the human experience, and if a player writes this into their character's backstory, so be it. But it's enough to imply these topical evils, especially when the adults at the table know it has to happen. I just don't subject anyone in my group to imaginary violation, studiously avoiding grindhouse theatrics...

Of course, there's no wrong way to do fantasy. I've played (and enjoyed) stuff I wouldn't consider trying myself, and I emphasize again this was negotiated beforehand. But just how much magic, or how much cultural integration, or how many similar variables comprising fantastical campaigns is up to the referee. I have preferences, but so does everyone, and it's always interesting to experience (especially at the table) what others generously create.